“And sneer of cold command”: al-Qusayr, Ramses the Second and the Battle of Kadesh

Syria’s al-Qusayr is no stranger to war. Within its boundaries lies Tell Nebi-Mando, the ancient city of Kadesh, where Egypt’s Ramses the Second and the Hittite King Muwatalli the Second locked swords in one of the greatest battles in antiquity. 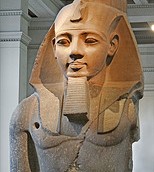 It would be well over a year before Percy Bysshe Shelley [1792-1822 CE] could gaze upon the Young Memnon, the colossal Ramses the Second and inspiration behind the poem, Ozymandias. At the time of the sonnet’s publication on 11 January 1818, the bust was on board HMS Weymouth bound for England having set sail from Malta a month before. Two years earlier in July 1816, Giovanni Belzoni [1788-1824 CE], acting on behalf of the British Consul in Egypt, had succeeded where Napoleon’s troops had failed. Belzoni freed the 7 ton stone from the sands of Thebes where it had guarded the Memnonium (later the Ramesseum) or mortuary temple of Ramses the Second, for more than 3000 years.

There began a two year odyssey to transport the statue from Thebes to Cairo, to Rosetta, Alexandria and onwards to Malta before arriving in London’s “Tower Wharf”. Throughout its journey regular announcements appeared in the British press to herald Memnon’s imminent arrival. Inspired by the news, both Shelley and his colleague (Horace Smith) competed to produce their version of Ozymandias. Both poems appealed to the authority of the ancient Greek historian Diodorus of Sicily. And both poems refashioned Diodorus’ epitaph, “King of Kings Ozymandias am I. If any want to know how great I am and where I lie, let him out do me in my works”, to illustrate the vanity of tyranny and its transience. 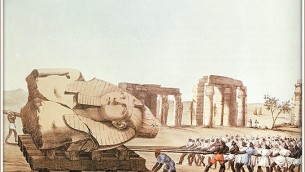 Truth be told, little was known of this King of Kings in 1818. Diodorus’s account of Ozymandias, a Greek transliteration of Ramses the Second’s throne name, had been written 1300 years after the Pharaoh’s death at a time when knowledge of hieroglyphics was all but lost. Hieroglyphics would remain obscure until the discovery of the Rosetta Stone in 1799 and its decipherment by Jean Champollion 23 years later. Thereafter it would not be until 1829 when Champollion would associate Ramses name and title with the inscriptions of the Ramesseum; only then would Ramses’ own voice emerge from centuries of silence.

Inscribed upon the stones of the Ramesseum, several times over, is Ramses’ near contemporaneous account of the battle of Kadesh (circa 1275 BCE): the most extensively-documented military engagement in the Ancient Near East. The temple walls, along with those of Ramses’ other temples at Abu Simbel, Abydos, Karnak and Luxor, invite us to “look on [Ramses’] works” in both hieroglyph and relief (stylised carvings).

The narrative unfolds in the new imperial capital of Pi-Ramses in Egypt’s Delta. Quick on the heels of the defection of the Amurru King Bentesina from Hittite domination, Ramses plans to invade Syria. This follows from his campaigns in the southern Levant of the year before. Ramses’ goal is to seize control of the city of Kadesh from the Hittite King Muwatalli the Second. In the spring of the Pharaoh’s 5th regnal year, Ramses marches at the head of 20,000 troops. They are divided into four battalions, all of which re named in honour of Egypt’s gods (Amun, Re, Ptah and Set).

By Ramses’ own admission we learn of two critical mistakes. First he drove his division (Amun) with such haste that he distanced himself from the other contingents by 15 kilometres. Secondly, wishful-thinking got the better of him. He believed the false testimonies of two captured Shoshu (or Bedouins) who revealed that the Hittite king had withdrawn in fear (to the north). Only later, after the capture and torture of two Hittite spies, did Ramses understand the danger that lay await. He had been lured into a trap with limited manpower.

“Not one of my princes, of my chief men and my Great was with me,” wails the Pharaoh, “not a captain, not a knight, for my warriors and chariots had left me to my fate”. With no choice but to fight, Ramses drove his chariot through the ambush to reach his distant forces at time when the Ptah division had just picked up the rear. Now with Ramses leading the Ptah division, he steered the enemy towards the river where many perished.

Were we to accept the imperial propaganda of Ramses we would be led to believe that Egypt’s encounter with Muwatalli the Second was a resounding success for the Pharaoh. The truth is very different. Between the lines is a nuanced tale of stale-mate, despite both sides proclaiming victory. That Ramses survived after his military blunders is remarkable. But Muwatalli still held Kadesh (which Ramses’ men had not managed to enter let alone destroy its defences).

Today our knowledge of the battle is “360”. It derives from both warring parties: the cuneiform tablets unearthed in 1906 from Bogazköy (Anatolia, modern-day Turkey) and multiple Egyptian sources. The latter have traditionally been ascribed to a poetic version of events (“The Poem”), a prose account (“The Record” or “Bulletin”) and a post-Ramses copy (by Pen-ta-wer-it in Papyrus Sallier III).

If the battle was inconclusive it did at least put an end to the long-running saga of control of Kadesh. Close to 150 years before Ramses set out on his war path, his ancestor Thutmoses the Third (1479-1425 BCE) defeated a coalition of forces led by Durusha, the then king of Kadesh, at the Battle of Megiddo. (Kadesh thereby fell to Egypt). This is the first mention of the city in the ancient record. Thereafter the Hittite king Suppiluliuma the First (1344-1322 BCE) began a series of incursions in Syria and reduced Kadesh to a vassal state. By the time of Pharaoh Amenhotep the Fourth (1353-1335 BCE), the city was back in Egypt’s hands before reverting to Hittite rule several decades later. Ramses’ father Seti the First (1306-1290 BCE) sought to re-establish Egypt’s influence and did conquer the city; but by 1275 BCE it was under Muwatalli’s guard, where the present story begins.

For the military historian the legacy of the battle of Kadesh lies not in its outcome but in the specifics of warfare itself. The sources offer unprecedented detail of the structure of both Hittite and Egyptian armies and their respective sub-divisions. We are also told that Ramses enlisted the support of Sardinian mercenaries and Nubian bowmen; all the while Lycian pirates fought by proxy for the adversary. The texts further indicate how the battle evolved from the Seat of Command (Pi-Ramses, Carchemish) and the weaponry used. The chariot featured prominently. Whereas the Egyptian chariot was lighter and faster than its Hittite counterpart, the latter could accommodate three men (driver, warrior, shield bearer) and was used as a mobile “firing platform” (in mass- formation). At the end of the hostilities we also learn that Muwatalli had in excess of 1000 chariots from his original artillery of 3500.

For many individuals there is another, much-touted, legacy to the Battle of Kadesh. Carved upon a stele in Ramses’ Temple of Karnak and incised on a cuneiform tablet from Bogazköy, is the Hattusili – Ramses Treaty of c. 1259 BCE. Frequently this text is referred to as The Treaty of Kadesh. It is also perceived to be the earliest peace treaty in existence. A 2 metre long copper copy of the tablet hangs on the wall of the UN building in New York. Turkey’s Minister of Culture and Tourism has also recently unveiled a monument to commemorate the “Kadesh Treaty” at the Bogazkale Museum.

That the cuneiform tablet was sealed by Muwatalli’s successor, Hattusili the Third, is not in doubt. However the location of where the treaty was concluded has yet to be determined; it may not bear upon the city of conflict fifteen or so years before. 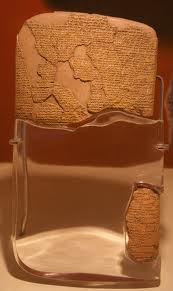 Whereas the Treaty’s articles provide for normalisation of relations between these two “superpowers”, the text comments on lines of succession and the protection afforded. In this regard the Treaty has been seen more as a directive for alliances than genuine peace. At best, the Treaty may reflect what is commonly termed a “cold peace” amidst the shifting balances of power in the ancient world.

The ancient city of Kadesh was identified with the Syrian village Tell Nebi Mando (Tell Nebi Mend) in 1841 by W.M. Thompson. Situated on an elevation to the north-west of al-Qusayr, 30 kilometres from Homs, and at a fork between the Orontes River and its tributary, the town commanded a highly strategic position. Given its location in the Homs Gap, a natural break in the coastal mountain chain of the Ansariyah-Zawiyah and Lebanon-Anti-Lebanon mountains, Kadesh controlled the West-East passage of trade from the Mediterranean to central Syria (and beyond). In sum, control of Kadesh was the key to control of the Levant in antiquity.

Map of the Region with Qadesh (Kedesh) near Lebanon

Excavations at the Tell commenced in 1921-1922 under Maurice Pezard. In 1971 the Tel Nebi Mend excavations resumed under the auspices of the Institute of Archaeology, London (later, University College London) and proceeded until the mid 1990’s. As yet there is no archaeological evidence to indicate the presence of Thutmoses the Third, Seti the First, Ramses the Second or the Hittite’s Muwatalli.

Today the site of Tell Nebi Mend (Kadesh) has been drawn into the battle of al-Qusayr (which itself has been understood as the battle for Homs and Homs province). Both the Rebels and the Regime strive to control al-Qusayr which in turn controls the Damascus highway to Homs, the main artery to Tartous (an Alawite stronghold), Tripoli and the weapon-smuggling route to Baalbek through the Beqaa valley.

On the 11th of April 2013 Syrian Army and Hizbullah captured the strategic hill-top village Tell Nebi Mando in the vicinity of al-Qusayr. At a height of over 30 metres, the Tell lent itself as a vantage point: the majority of the neighbouring villages were in easy reach of Regime fire. In the course of the broader offensive, many of the 50,000 inhabitants were denied safe passage out of al-Qusayr and its surrounding villages. On the 31st May 2013 allegations emerged of an attack by governmental forces on a civilian convoy which was attempting to flee the war-torn province.

The battle of al-Qusayr has generated much comment not least from the Middle East Director of Human Rights Watch, Sarah Leah Whitson. She has called on the UN Security Council to refer the situation to the International Criminal Court.

For the strategists, the legacy of this modern battle is not substantially different from that of the Battle of Kadesh centuries before. Its lesson lies in the deployment of troops and tactics of warfare. Whereas the battle of al-Qusayr was clearly decisive in Assad’s favour, History will note that it was also the first direct confrontation of proxy fighters in the Syrian Civil War: Jabhat al-Nusra vs. Hizbullah. Equally, the fallout from al-Qusayr may influence the much-anticipated Geneva peace talks, now scheduled for July, where the issue of alliance will surely be tabled. It remains to be seen whether an Assad in the ascendency will attend. He may well be emboldened after this battle and may beckon the international community to look on his works (and despair); but this may prove premature. As Shelley, a Romanticist (turned pragmatist), muses in Ozymandias, tyranny, with its “sneer of cold command”, is ultimately doomed.

Adam Blitz is a Fellow of the Royal Anthropological Institute, London and a former Fulbright scholar. The views expressed in the article above are those of the author alone. adam.blitz@columnist.com @blitz_adam on Twitter

Antique Lands: The Dome of the Treasury and Genizah of the Umayyad Mosque, Damascus. The case for Jobar: Syria, synagogues and subterfuge (17 January 2014)