Antique Lands: The Dome of the Treasury and Genizah of the Umayyad Mosque, Damascus.

“If eternal paradise exists on earth,” ponders the itinerant ibn Battuta [1145-1217], “it is found no where else but in Damascus.”

In better times when the Umayyad Mosque of Damascus beckoned tourists and pilgrims alike, the theme of paradise could be witnessed in full mosaic splendour. Scenes of shaded villas, river banks strewn with poplars and Eden-like orchards graced the courtyard; and the facade of the Qubbat al Khasna, “The Dome of the Treasury”, could nor help but catch even the most untutored eye. 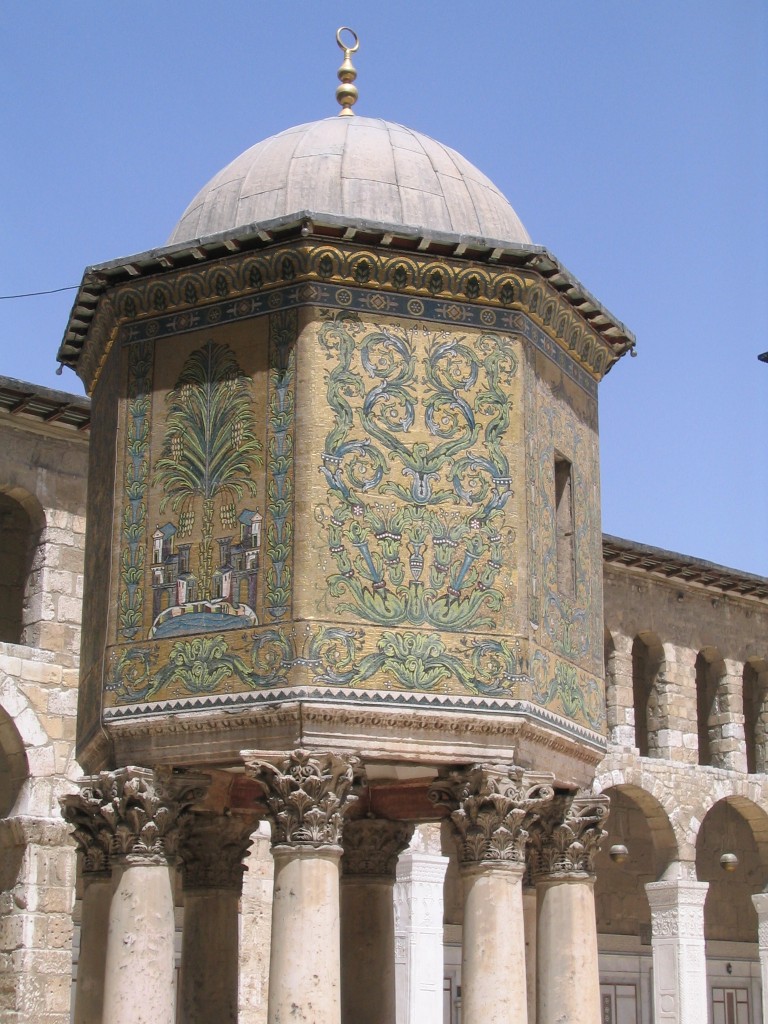 The Qubbat al Khasna, also known as the “Bayt al Mal”, “The House of Money”, was commissioned by the governor of Damascus, Fadil ibn Salih, in 789 CE. Octagonal-shaped and dome-capped, it rests at lofty height upon eight recycled Roman columns in the west of the mosque’s courtyard. There is no entrance to the building: it is without a door. The only access is by means of a ladder to small side window. The Qubbat al Khansa is truly a “moneybox”, in its form and original function.

As its name would suggest it was designed to serve as a treasury. It held the charitable endowments of the mosque’s trust or Waqf. Beyond its physical inaccessibility, the building’s eightfold exterior also symbolised the eight categories earmarked for the distribution of the mosque’s funds. These were: the poor, the destitute, the bankrupt, travellers and the disabled, tax collectors, converts to Islam and non-Muslims who refrained from fighting, ransom for captives and lastly, the cause of Allah.

At some point in the course of 1100 years the Qubbat al Khasna acquired another role, that of a repository for sacred manuscripts or genizah. The term “genizah” first appears in the biblical Book of Esther [3.9] where it has the same meaning as the Old Persian “ganj”, “treasury” or “storehouse”. Within the faiths of Judaism and Islam the notion of a genizah as a “storehouse” has a different meaning in respect of each religion’s scribal tradition. If a text is deemed to be impure, as dictated in Judaism’s Talmud (Masekhet Soferim – Tractate of the Scribes), it must be buried. The early jurists of Islam, on the other hand, offer alternatives to include incineration, immersion in water as well as burial. The genizah thus served as a “half-way house” before ritual disposal could occur.

The reality on the ground is somewhat different. The store room of the Ben Ezra Synagogue, the Cairo Genizah immortalised in Amitav Ghosh’s 1993 “In an Antique Land”, tells a different story. Disposal did not follow swiftly, if at all. The same can be said for the genizah of the Great Mosque of Sana’a. The holdings lived long enough to challenge the very tenets of Islam 1300 years later and stir scholarly debate in the 1970’s. Both repositories, in separate capacities, have contributed to the interdisciplinary field of Genizah Studies (itself a forerunner of Dead Sea Scroll research). 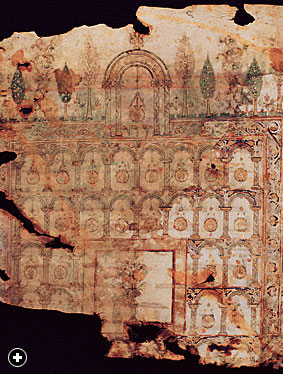 Garden scene from an 8th Century Qu’ran, found at Sana’a

Paradoxically it was the lure of Christianity’s sacred writings, which were exempt from the scribal conventions mentioned above, that first drew attention to the Qubbat al Khasna’s genizah. Damascus tradition had long asserted that the structure held guard of the Christian past and that the building was never to be opened except by order of the Sultan. In 1898 by appeal to latter, and in the presence of Kaiser Wilhelm the Second and the New Testament scholar Freiherr (Baron) Hermann von Soden [1852-1914], tradition was defied.

Von Soden had great expectation of what lay in store. He was driven by the Lower Criticism, the scholarly discourse of textual studies, and was hungered by the recent finds of the day. Two years before his travels to Damascus, the excavations at Oxyrhynchus (Egypt) had revealed part of early Christian Gospels or codices. Seven years earlier Westcott and Hort had produced a critical edition of the New Testament in Greek based upon their re-reading of the early Christian sources. And three decades prior, the “buccaneer” Constantin von Tischendorf had uncovered the 5th Century Codex Sinaiticus, one of the most ancient and comprehensive Bibles of all times, which he claimed to have found in a fire basket in St. Katherine’s Monastery, Sinai.

Von Soden dreamt of another ancient book that could rival Codex Sinaiticus, both in its antiquity and completeness. Back in Germany he secured funding from a Fraulein E. Koenigs to review the Damascus documents with which he had only the most fleeting of acquaintance. On behalf of von Soden Dr. Bruno Violet was sent to Damascus in 1901. He was enlisted to enter the Qubbat al Khasna where he would explore its contents.

By all accounts Violet’s initial survey was a disappointment. In excess of 150 sacs were retrieved from the building. None of the works von Soden had hoped to locate was forthcoming. The texts, we are told, were in a “fragmentary condition: some were eaten by mice, others were perforated by bookworms, and all were torn or mutilated.” Most of the documents were of the Qur’an or vestiges of Arabic and Turkish literature. After a wearisome nine months Violet reported that he had not found any material of significance. Yet, once the items were brought to Germany and deposited in the Staatsbibliothek (State Library) of Berlin, Violet had cause to revise his opinion. The richness of the genizah now became apparent.

Under its leaden dome the Qubbat al Khasna had stored a world of literature. The body of languages included Greek, Latin, Hebrew, Aramaic, Arabic, Coptic, Georgian, Armenian and Old French. The earliest texts were in Greek and were written between the 4th and 10th Century. Thereafter Arabic became the language of choice for local Christians as Violet’s analysis of Psalm 78, the bi-lingual Greek and Graeco-Arabic (Arabic in Greek script), was to show.

Of the early manuscripts the Qubbat al Khasna could boast: three sheets from a 4th Century version of the Song of Songs, a 4th-5th Century fragment of Paul’s Letter to the Galatians, remnants of a 5th Century Book of Proverbs, a 5th Century scrap of Judith as well as a 6th Century portion of The Book of Esther. And if von Soden’s much sought-after codex did not materialise, the genizah did yield several leaves of a 7th and 8th Century parchment of the Gospel of Mark and Gospel of John.

The above are a few early examples of the remarkable cache held within the Qubbat al Khasna. It offers a brief glimpse of a Byzantine and early Islamic Damascus; a history the Qubbat al Khasna had been keen to hide. Hebrew marriage contracts (Ketubot), a Samaritan calendar, a 9th Century morsel of Aristotle and an Old French account of King Baldwin IV of Jerusalem, though later than the Greek texts, also add to the collection. 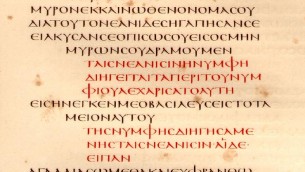 Although the genizah of the Qubbat al Khasna could not conceal its past, its contribution to history has not followed as a matter of course. On the contrary, it has been largely overlooked if not forgotten. Lower Criticism, partisan in outlook and the driving force of much early 20th Century scholarship, has held sway at the expense of broader discussions.

What the Qubbat al Khasna does bring to the table is continuity; for the Umayyad Mosque sits on much hallowed ground. Directly beneath is the Byzantine Cathedral of St. John and it may just be the case that a scribal school, a scriptorium, adjoined the cathedral and produced some of the documents which the Qubbat al Khasna would later shelter. This is but speculation.

At the very least the genizah of Qubbat al Khasna can claim a rightful place within the field of Genizah Studies and should merit a reassessment (however difficult). The existing research is far-flung and disparate. With the exception of recent Italian scholarship, little attempt has been made to consolidate the breadth of the scholarly (secondary) literature. There is also the question of the manuscripts themselves: the status of the corpus is unknown. The National Museum of Damascus does retain several of the Islamic texts. But of the myriad of documents returned to Syria from Berlin in 1909, proof still awaits.

Thankfully Berlin’s Staatsbibliothek maintains 53 photographs of the manuscripts in languages ranging from Greek, Hebrew, Arabic, Coptic and Latin. This may not be as extensive as years before; but the Qubbat al Khasna’s window to the world outside is, nonetheless, still open.

The author would like to thank Professor Barry Flood and Dr. Arianna D’Ottone. He is also grateful to Petra Figeac of the Staatsbibliothek, Berlin.

Adam Blitz is a Fellow of the Royal Anthropological Institute, London and a former Fulbright scholar. The views expressed in the article above are those of the author alone. adam.blitz@columnist.com @blitz_adam on Twitter