As the doors to Rome’s College of Vestal Virgins closed for the last time Mnemosyne, goddess of Memory, took flight.

A decade before in 381 CE, immediately after the First Council of Constantinople re-affirmed the Nicene Creed and the vexed question of the Trinity, the Roman emperor Theodosius [347-395] issued two edicts. Both compelled a Catholic interpretation of the single Godhead: Father, Son and Holy Spirit, equal in part.

Theodosius’ edicts went beyond doctrine. They signified the first attempt for the Byzantine Church to proscribe a muscular faith and eradicate its rivals. By decree Theodosius abandoned the time-honoured tradition of Roman tolerance and ushered in an era of unprecedented hatred.

The reverberations were felt far and wide. In the Western half of the Empire Vesta’s sacred hearth was extinguished. At Delphi the oracle was silenced never to prophesise again. In the East Maternus Cynegius, Theodosius’ First Minister or Praetorian Prefect of the Oriens forbade pagan sacrifice and destroyed the most revered temples of Hellenistic Egypt and Syria. He attempted to destroy Apamea’s Temple of Zeus Belos, famed for its oracle, but Moira, goddess of Fate, intervened. The honour (or crime) fell to the Bishop Marcellus, Cynegius’ ardent follower. He laid waste to all of the temples in and around Apamea on the Orontes in North West Syria. A terrain which had once witnessed the might of Alexander’s general Seleukos Nicanor, the Roman Republic of Pompey and the Empire of Augustus, was now altered for ever.

Two hundred kilometres away from Apamea in Callincum, present day Raqqa on the Euphrates, Judaism became the victim when a different bishop, though no less angry, burned down the synagogue. Times were changing.

Though surrounded by acts of violence, within and beyond the city walls, the Jewish community of Apamea appeared wholly unaffected by Christian rage. In 392 CE, as Vesta’s flame dwindled, the Apamean Jewish elite sought sôtêria (salvation) and inscribed their pleas in tesserae. In Greek, upon the newly founded synagogue floor, Jason the Deacon or archisynagogos would declare:

“Iiasios son of Eisakos, archisynagogos of Antioch made the mosaics of the entrance for the salvation of Photion (wife) and children and for the salvation of Eustathia (mother-in-law) and in memory of Isaac and Aidesios and Hesychion (his) ancestors. Peace and mercy on all your blessed community.”

In its day, the synagogue at Apamea was very much part of the urban landscape. As with the monumental synagogue at Sardis which was incorporated into a bath-gymnasium complex, the Apamean house of prayer was conspicuous to even the most inexperienced eye. It sat midway, immediately off the Cardo or Grande Colonnade: the main North-South axis upon which the Hellenistic and the Roman city were built. In the other direction on the Decumanus, eastwards and perpendicular to the Cardo, the synagogue could be found on the street descending from the great theatre in the shadow of the hill-top citadel which Pompey had razed long ago.

Inside the synagogue was a large mosaic floor, approximately 120 metres square, sub-divided into geometric carpets and inscribed panels. Unlike their fellow brethren at Dura Europos with its murals emblazoned with scenes of the patriarchs, the Apamean Jews adhered to the Second Commandment with its prohibition against representation. Nevertheless, strictures aside, these individuals failed to make any reference to their god whatsoever. Were it not for the smallest of Menorah, there would be nothing to distinguish the mosaic floor from that of an imperial villa save the twenty dedicatory inscriptions.

In one such inscription the same Iiasios would boast to his Fourth Century congregants that he “made the entrance of the mosaic (for) 150 feet (in the) Year 703 Audynaios (December) 7 a blessing to all.” Women too left their mark. Mnemosyne’s handmaidens featured prominently as wives in three conjugal inscriptions and as women in their own right. Nine donations testify to this fact. Abrosia, Domnina, Eupithis, Diogenesis, Saprika all lent their names to posterity as did Alexandria who “having made a vow made a 100 feet for salvation of all her own.”

The synagogue was identified in 1934 during the Fourth Season of excavations by the Mission Archaeologique Belge under the directorship of Fernand Mayence. From the outset the Belgian archaeologists focused their investigations on the South-East region of the City off the Grande Colonnade. However the team had no notion of a potential synagogue at Apamea at this time; the textual references being sorely lacking.

In actual fact there is very little information about Jewish communities in Late Antiquity. The Rabbinic sources rarely mention the Jews of the East Roman and Sassanian (Persian) provinces. At the other extreme the Christian sources, bar the legislative Theodosian Code, provide a highly polemicized account of Jewish Life. In this regard we are very much dependent upon archaeology and the donor inscriptions which have since come to light at the Diaspora synagogues of Antioch, Apamea, Sardis and those of Upper Galilee and Golan.

By good fortune, the first indication of a synagogue emerged with the discovery of the Iiasos inscription: the first find. The use of the term archisynagogos, the reference to Iiasos, (one of the Council of Elders at the capital Antioch north of Apamea) and the Seleucid calendar date of 703 (392 CE) established both the origin and the Jewish context beyond doubt. In the course of the season, and subsequent campaigns, it became clear that the synagogue and the Grand Atrium Church of the 5th and later the 6th Century shared hallowed ground; the churches were built directly over the smaller 4th Century synagogue which was intertwined with the larger ecclesiastical structure. 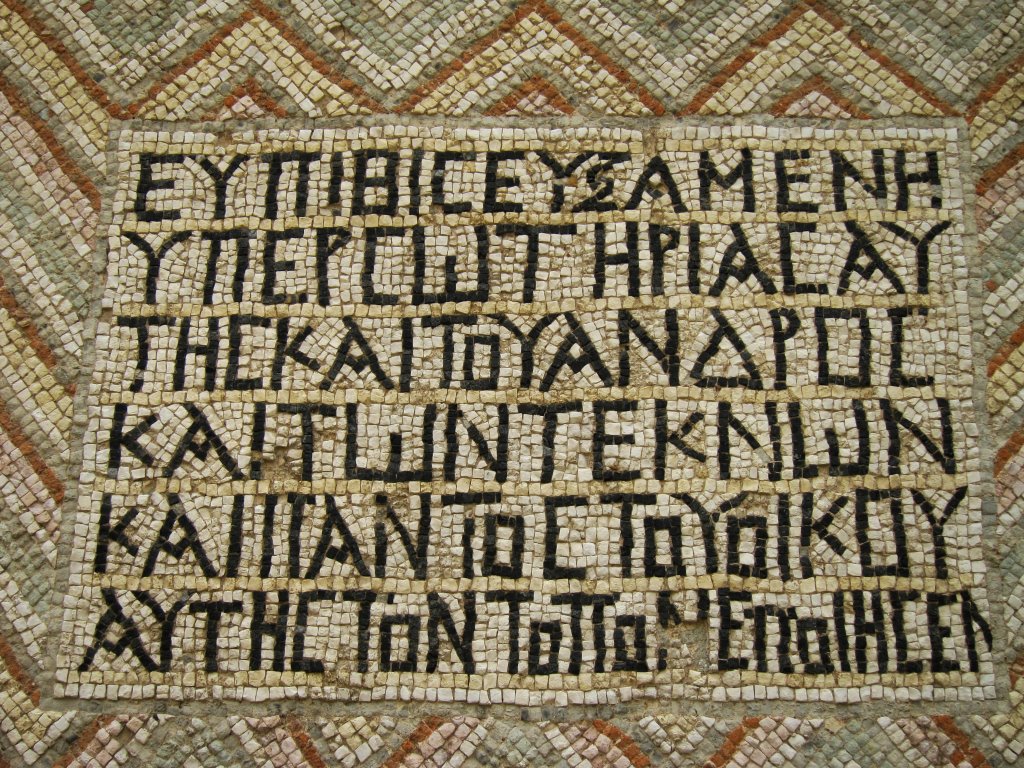 Donor inscription now housed in Damascus National Museum – courtesy of Sean Leatherbury. Text reads, “Eupithis, having made a vow for the welfare of herself and her husband and her children and all her household, made the place”

Sadly, here good fortune ends. Be it Vesta’s revenge or inordinate bad luck, the Belgian excavation reports were destroyed in two separate fires at the Musee du Cinquantenaire, Brussels in 1944 and 1946. All that exists are the Preliminary Reports which are, by nature, limited. Nonetheless, we should be grateful that, two years before the calamity, Eleazer Sukenik of the Hebrew University, Jerusalem published the plan of the mosaic floor. On the basis of this work and the measurements cited in the panels, the layout can be reconstructed. And whereas we may not be able to give a monetary value to the inscriptions, the cost of the mosaics per feet is unknown, we can still glimpse the competition at play as the patrons jostled for attention in the name of sôtêria. This includes women who were anything but the weaker sex. On the contrary, they constituted over half of the donors and sponsored fifty per cent of the design. Here was a community in which women as well as men held positions of influence, wealth and prestige and this extended to Antioch, Beth She’arim and Jerusalem.

The last days of the synagogue remains a mystery. The Church Fathers offer no comment. Yet archaeology may provide some insight and it is to the stones of antiquity to which we must turn.

The mosaics, which now reside in the National Museum of Damascus as well as in Brussels, are in an extraordinary state of preservation. The floor is very much complete and the niche, which would have held the Torah, is still discernible. There is no indication of fire or damage from earthquakes, a frequent occurrence at Apamea (and in the entire Orontes region). Equally, there is no sign that the mosaics were removed from their find-spot and recycled in one manner or another.

All of the archaeological evidence points to the deliberate construction of the first of several churches built immediately over the synagogue floor. This had the effect of sealing it from the then world which may well have been the prime motivation: an act of damnatio memoriae on the part of Church authorities to rid Apamea of its Jewish past and inter Mnemosyne.

Jean Charles-Balty, the former director of excavations at the site, dates the first phase of the Atrium Church to approximately 415-420 CE. In which case, the synagogue existed for barely twenty years before its demise. This date corresponds closely with the textual evidence for the resurgence of anti-Semitism at Immestar (present day Qinnasrin), 25 kilometres South West of Aleppo and in close proximity to Apamea. Socrates Scholasticus writing in his Historia Ecclesiastica during the reign of the Emperor Theodosius the Second [305-435 CE], reveals that “at a place named Immestar situated between Chalcis [ad Bellum] and Antioch in Syria…[the Jews] impelled by drunkenness, were guilty of scoffing at Christians and even Christ”. He then recounts the sanction for the alleged murder of a Christian child by the Jews. The emperors ordered their men “to find and punish the delinquents. And thus Jewish inhabitants of this place paid the penalty for wickedness.”

Whether the penalty resulted in destruction of a sacred site at Immestar or Apamea we cannot say for certain. However we do know that that, near and far, the synagogues at Antioch, north of Apamea, and Rabbat Moab in the Jordan were destroyed within a few years of each other; and that in 423 CE the Emperor Theodosius the Second was petitioned not to re-build the Antiochene synagogue.

Today Apamea is one of the many “Dead Cities” of northern Syria. It has yet to be inscribed as a UNESCO World Heritage Site and remains on the Tentative List as it has done for the past fifteen years. The city’s regional prominence has long since waned; it has been eclipsed by metropolitan centres of Aleppo, Lattakia, Hama and Homs. Apamea, an ancient city in the plateau and fortified hillside, perseveres. It has endured the indiscriminate wrath of Poseidon, god of earthquakes. It has also expanded and contracted in size in response; but at no time was it fully abandoned or dead. Apamea continued to exist, as it does to this day, in the hillside town of Qala’at Mudiq, the ancient citadel and tel, from where it began. 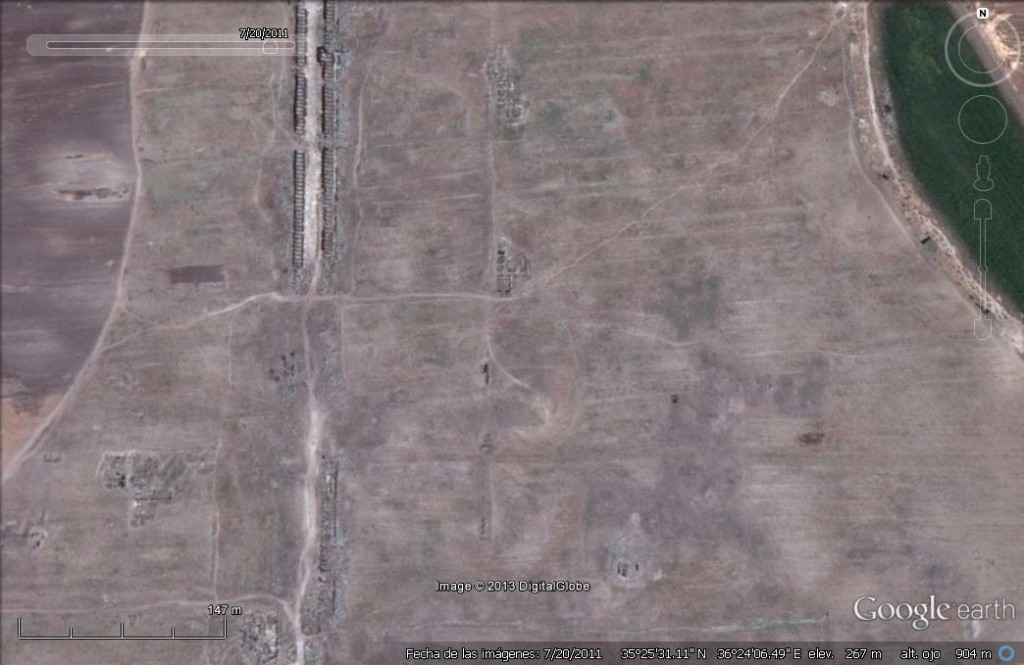 Of recent, Apamea has become enmeshed into the Syrian Conflict which has devastated the country and deprived the nation of much if its heritage. The “lower” city, the ancient colonnaded town mentioned above, has become one of the worst affected sites. Mnemosyne has been raised from the dead only to be pillaged. Thousands of potholes scar the ground as looting and illegal excavations persist. Paradoxically, by virtue of a militant Christian past, Judaism is not under threat; rather Christianity, with its footprint all over Late Antiquity, is. 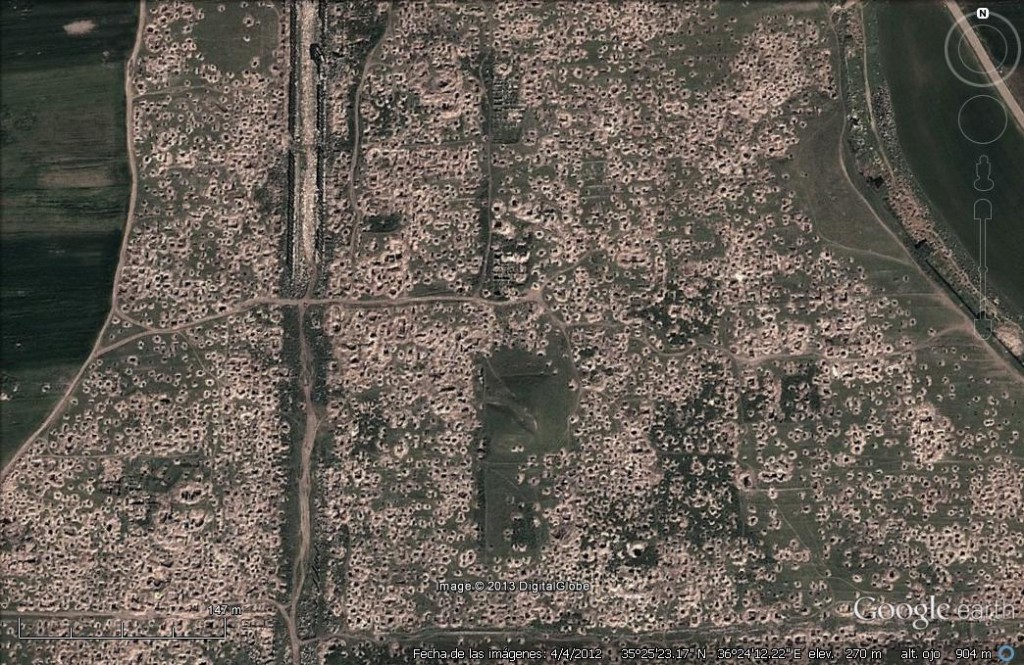 The same perspective taken in 2012 after the conflict. Thousands of pot-holes now scar the site of Apamea in one of the worst incidences of illegal looting in Syria

On higher ground, the Mameluk fortifications of Qala’at Mudiq have been badly shelled and the town has been abused by both Regime and Rebel forces. The damage has been severe. Should Apamea be drawn further into the abyss, it may well be the case that, for a dead city which has survived for millenia, a eulogy is fast approaching.

The author would like to thank Lea Roth-Gerson, Emma Cunliffe, Andreas Schmidt-Colinet and Jean-Charles Balty for their photographs and comments.

Adam Blitz is a Fellow of the Royal Anthropological Institute, London and a former Fulbright scholar. He writes on the Middle East, Central Asia and cultural heritage. He has written for Ha’aretz, Jerusalem Post, Aeon Magazine, The Times of India and the Times of Israel. The views expressed in the article are those of the author alone. Any errors or omissions are similarly those of the author. Adam.blitz@columnist.com @blitz_adam on Twitter