“Nothing can prepare you for the horrific reality of what is going on. Today we came face to face with one of the youngest victims of this ongoing refugee crisis. It is a tragic reminder of the thousands of people who have died trying to reach safety in miserable conditions,” said founder Christopher Catrambone.

AGATHONISI (02/02/2016) – Early this morning 35 refugees endured five hours in heavy seas only to end up shipwrecked upon jagged rocks on a remote Aegean island called Agathonisi (pop. 100). Local fishermen where the first to find them and alerted the Hellenic Coast Guard. The 60-metre MOAS ship Responder was launched by the joint rescue coordination centre Piraeus to conduct search and rescue operations.

The MOAS fast-rescue boat was deployed, guided by fishermen who took the team to a rudimentary shack where the wet, bleeding refugees huddled. One small baby boy had drowned and 10 people were injured by the violent impact on the sharp island rocks. A three-month old infant boy was severely hypothermic and was stabilized.

MOAS then coordinated with local NGOs on the island, together with the two local fishermen, three French medical staff from Medecins Sans Frontieres as well MOAS’ onboard volunteers from CISOM and the ERRC (Emergency Response Rescue Corps). The Swedish Sea Rescue Society also assisted, while a quayside restaurant participated in the rescue by sheltering a number of the refugees.

After treatment, and processing by Greek authorities, the wounded and deceased were transferred to the Responder and brought to Pythagoria, the southern port on the island of Samos. MOAS was met by the Hellenic Coast Guard, Greek police and the coroner. Although movement of refugees from Turkey has been reduced by freezing windy conditions, the high seas and numbing cold have not stopped refugees from making the five-hour crossing.

“Nothing can prepare you for the horrific reality of what is going on. Today we came face to face with one of the youngest victims of this ongoing refugee crisis. It is a tragic reminder of the thousands of people who have died trying to reach safety in miserable conditions,” said founder Christopher Catrambone.

“The light in all of this darkness is that there are so many individuals and organisations dedicating themselves to saving lives. As we have seen today, collaboration and cooperation is crucial to all of us being effective in our efforts,” he added.

MOAS launched its life-saving mission in the Aegean Sea late last month in the waters between Turkey and Greece, aboard the MOAS Responder, which is fully-equipped to conduct mass rescue and post-rescue care. MOAS also coordinates with all stakeholders including the Hellenic Coast Guard, NGOs, fisherman and volunteers. The Responder is also able to deploy two fast 30-knot weather tight rescue boats Alan and Galip, named after two Syrian brothers who drowned in September. 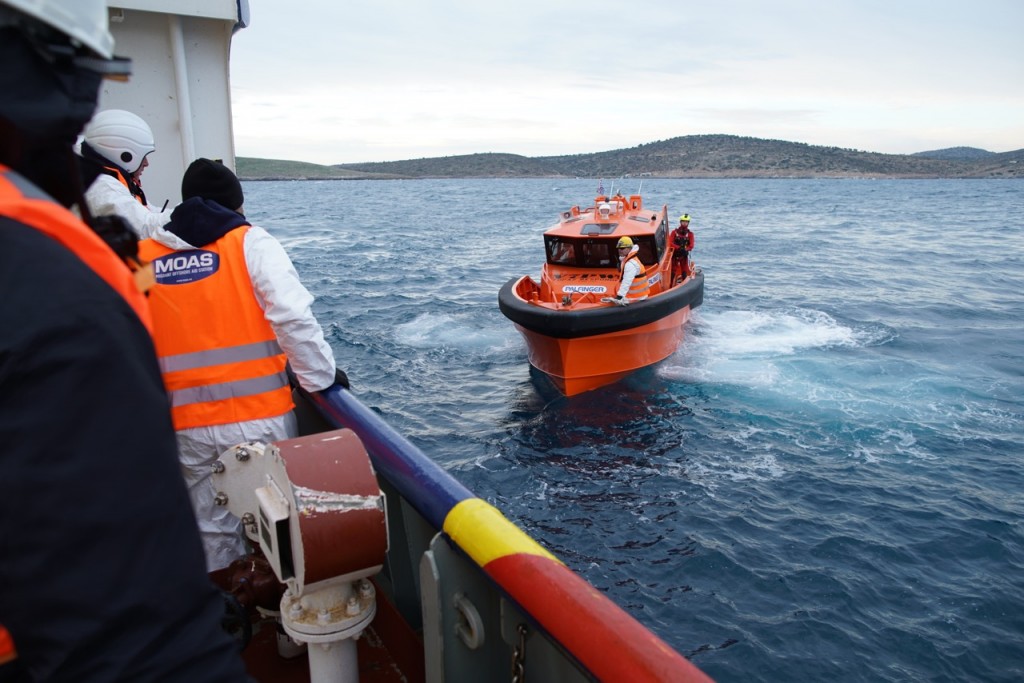 “It is a fitting testament to our public support that MOAS can apply our public donations to save people and serve local lifesavers,” said MOAS Director Martin Xuereb.

Last week, MOAS rescued some 59 refugees from two separate unseaworthy boats and will continue to mount search and rescue operations where needed.

Who is MOAS: MOAS has already saved almost 12,000 people in the Central Mediterranean since 2014. In 2015 an outpouring of public support allowed MOAS to become a global NGO providing SAR services where they are needed the most. The area of current operation was determined after discussions with the Greek authorities. The Responder acts a mother ship to launch 24/7 all-weather rescues in the Aegean.

Who is CISOM: Since 2008, CISOM – the Order of Malta Italian Relief Corp, has been providing health care on board of the Coast Guard and Guardia di Finanza ships. It also participated in the “Mare Nostrum” mission with the Italian Navy in the Strait of Sicily aimed at rescuing migrants at sea and offering timely and effective medical aid. Through the doctors and nurses have developed a specific capability in search and rescue at sea, specialising in healthcare emergency. With the aim of training professionals to cope with emergency situations occurring during the management of migrant flows on high seas, CISOMS’s rescue expertise and specific hospital interventions has turned it into a corps specialized in first-aid at sea. It has saved some 40.000 migrants.

Open Letter to The Independent: Independence betrayed. Russia Today, Iran’s Al-Alam and Drone footage of Jobar Antique Lands: The Dome of the Treasury and Genizah of the Umayyad Mosque, Damascus.