An open letter to the editor, The Independent, 23 December 2015 re: ‘Drone video shows level of devastation in Damascus’, Charlie Atkin.

Charlie Atkin’s article, ‘Drone video shows level of devastation in Damascus: the footage was captured over the Syrian capital’s district of Jobar’, The Independent, (Wednesday 23 December 2015) has only contributed to the propaganda which both the Al-Assad Regime and its factional opposition have long sought to perpetuate. And here The Independent is sadly anything but. Your story derives from Russia Today (of the same date) but ultimately the Iranian Al-Alam, and accepts the veracity of the otherwise ludicrous statement which is repeated near verbatim as evidenced below,

“Before the conflict in Syria erupted in 2011, the neighborhood was home to some 300,000 residents. The suburb contained a number of ancient landmarks, most notably the Green Synagogue, the oldest Jewish synagogue in the world. It also contained the Grand Jobar Mosque in addition to the tomb of the Prophet Elijah”. 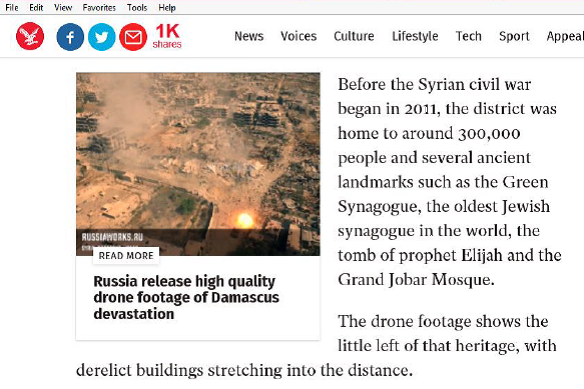 Which “Jewish synagogue” is Mr. Atkin referring to? There is no such reference to a “Green Synagogue” at Jobar. The Jobar synagogue was one of many medieval monuments to revere the Prophet Elijah, the Hebrew Eliahu Hanavi or Arabic Al Khodor and to attribute a cave within the synagogue complex to the prophet. Folklore, built upon the biblical tales (1 Kings 19 v 8) may have its charm but few would accept that the site originates from the reign of the Israelite Ahab circa 850 BCE or that it is any older than the “Elijah caves” of Latakia, Homs, Aleppo and Haifa.

However critical it has been for the Regime and Opposition to embroil the synagogue in its war of words, which has been the case since 2013, The Independent should know better than to accept the wisdom of the Regime’s proxy news outlets. Jobar synagogue was not only not the “oldest Jewish synagogue in the world”. It was not even the oldest synagogue in Syria. Dura Europos, famed for its tempera-laden walls, can boast a date before 256 CE. The dedicatory mosaics from the synagogue at Apamea (392 CE) also reveal an ancient lineage. Both the Dura Europos wall paintings and the Apamean mosaics remain in the National Museum of Damascus. They live to tell their history as does the Great Synagogue (or Bandara) in Aleppo with an inscription from 834 CE.

Some have tried to read the Talmudic reference of ‘Abi Gobar’ as that of the Jobar, 2 kilometres east of Damascus, and arrive at an early date around the 4th CE. However there is no reason to associate Syria’s Jobar with ‘Abi Gobar’ far beyond the Euphrates and Tigris in Iraq – the heartland of rabbinic Judaism. The earliest uncontested literary sources for Jobar are from the itinerants Samuel ben Samson (1210) and Rabbi Jechiel of Paris (1258-76). Both post-date the 11th Century.

Similarly, the photographic evidence which we might use to support the archaeological record, yields nothing particularly ancient except for the shrine attributed to Elijah. (This is ostensibly a Late Antique catacomb). The question of how the shrine became incorporated with the later synagogue remains a mystery.

Adam Blitz is a Fellow of the Royal Anthropological Institute, London and a former Fulbright scholar. He writes on cultural heritage and its demise. He is a member of PEN International. On Twitter @blitz_adam adam.blitz@columnist.com

An International Response to a Global Crisis: MOAS and the Italian Red Cross strengthen their partnership to save lives at sea Migrant Offshore Aid Station (MOAS) rescues shipwrecked Syrians on Greek island of Agathonisi